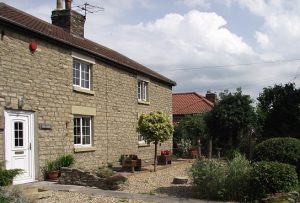 Prior to the mining boom in the nineteenth century, the only settlement of any note in the current Parish of Eldon was at Old Eldon. The hamlet of Old Eldon contains nine houses of some age, of which Eldon Hall Farm is the largest and is believed to be Georgian in origin. In recent years the barns on the farm have been converted into dwellings, the first major development in the Parish for nearly seventy years. There are also still traces shown on Ordnance Survey maps of a medieval village near to Old Eldon.

The history of the main settlement in Eldon is tied up with mining.

The village of Eldon which grew up around mining was distinctive for most of the houses having the suffix “Rows” – for example Front Row, Halls Row, Office Row, Pasture Rows and so on as part of their names.

The following photograph shows Pasture Rows, Eldon, looking North in the 1960’s. Reproduced with permission of Ray Goud. At the time, the area was heavily opencasted, with a Brickworks nearby. The area is totally transformed today:

Eldon Colliery, also known as South Durham Colliery, opened in 1829 and closed in 1932. The houses built in the main settlement were to house the workers at the mine and also the overspill of persons working in nearby Shildon, many of whom were Irish in origin. At the time it ceased working in 1930, more than 1200 persons were employed in the mine.

The mines brought with them the need for air and recreation for people who lived locally. There was an open air swimming pool for the pitmen, built in 1912 by Pease and Partners, the then owners of South Durham Colliery. Tennis courts and bowling greens, together with a gym were also constructed, for which the miners paid a subscription of 1d (one penny) per week. There were also allotments. All of these are long gone (the pool closed with the onset of the Second World War). An original plaque recording the names of some of the winners of swimming races at the pool is housed today in Eldon Community Centre.

There has been little in the way of development in Eldon since the 1950’s until the completion of the Barn development in Old Eldon referred to above. Eldon was declared by the then Durham County Council to be one of several “Category D” villages which were to receive no new building, either residential or commercial. Some of the houses by the 1960’s were in a poor condition, such as Halls Row, and were demolished. However, there was a strong community spirit and whilst there is some housing stock which requires improvement, many of the long standing residents have modernised their homes extensively.

The last major working of coal, at Eldon Deep opencast coal site, was completed in 2002. The brickworks on the fringe of Eldon closed in the last decade and has been replaced by a materials recycling facility. There are strategic mineral deposits adjacent, identified in the County Durham Local Plan and the quarry next to the former brickworks which produced brick shale and associated coal and clay still operates. You would be hard pressed today to believe that coal mining had ever taken place in what is now an attractive semi-rural area which has been extensively planted with trees. 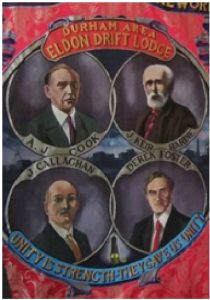 Recent years have seen the construction of a new purpose built community centre and the dedication of a new miners banner, for Eldon Drift, which is paraded proudly every year at Durham Miners Gala.

In addition to the three original cartouches on the Banner, there is an addition one, containing an image of the late Lord Derek Foster, who was formerly a Member of Parliament for our area.